2022-05-15: summary of the May 14 meeting of the ACLA Communications Coordinators

If you have suggestions for additional information that you think would be useful in the context of ACLA's mission, please let us know!

ACLA's programs are funded by annual contributions from the participating lakefront associations.

Representation in ACLA is voluntary. Each participating lakefront association provides a "Communications Coordinator" and a designated backup, and the Steering Committee provides overall coordination.

ACLA Communication Coordinator meetings are held in May each year on the Saturday before the Victoria Day weekend. Invited presentations usually include ACW, MVCA, Huron Perth Public Health, and others.

Here is a list of the by-laws and regulations that are relevant to lakefront property owners.

Most of ACW's lakefront seasonal properties are subject to Ontario's regulations for development within the 100-year erosion line of the Lake Huron shore and bluff. For details, see MVCA shoreline and gully maps and regulations.

The Lake Huron Centre for Coastal Conservation offers a number of community programs and has many guides that are of particular interest to lakefront property owners.

Pollution that affects the lakeshore community is an on-going concern. DNA analysis of tests done by ACLA in 2003 showed that the E.coli source is animal, not human. The results of ACLA's annual stream-testing program since then show that the dominant cause is untreated run-off from agricultural activities. This was clarified in a UoGuelph/MOE DNA-analysis research report published in 2009, conducted in 2005/2006 around 18 Mile River, which confirmed that the sources of E.Coli were 59-62% livestock/manure run-off, 16-18% persistent swash-zone E.Coli, 5-14% wildlife, 2-3% human, and 8-16% unquantifiable mixed sources.

Through its lakeshore environmental strategy, ACLA works to reduce the effects of agricultural runoff. These efforts led to the creation of the Healthy Lake Huron program to promote safe and clean beaches from Sarnia to Tobermory. Five key watersheds were identified as priorities for immediate action. Program staff work with local partners to develop and support the implementation of watershed management plans, with specific targeted actions, as well as monitoring and research needs, for each priority area. The priority in our area is the Garvey-Glenn Project. For more information, see the HLH reports.

Ontario's Clean Water Act is intended to keep contaminants from seeping into the sources of our drinking-water lakes, rivers, and aquifers. The Ausable Bayfield Maitland Valley Drinking Water Source Protection Committee is responsible for developing proposed policies for our area. Huron County also has a number of related water-protection programs.

ACLA has been urging this since 2002. In 2005, the Huron County Health Unit initiated a voluntary re-inspection program, and inspected 174 properties in 2005 and 178 in 2006. In 2010, HCHU proposed a mandatory inspection program, but the program failed to get support from enough of the nine municipalities. With the 2020 merger of the Huron and Perth health units to form Huron Perth Public Health, responsibility for approval of septic systems shifted to ACW under the Chief Building Official.

You might find this septic system trouble-shooting guide useful.

Each year, June through August, HPPH measures the E.coli levels at all public and some test-case beaches. Levels change from day to day. E.coli levels are closely related to whether rainfall has recently carried pollutants from inland via the streams, and whether the water has recently been churned by wave action. If you are in the lake up to your waist and cannot see your feet, it is not advisable to be in the lake that day. 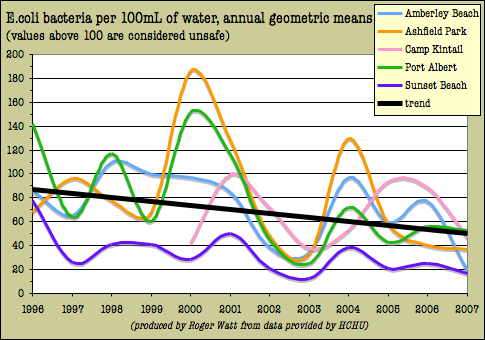